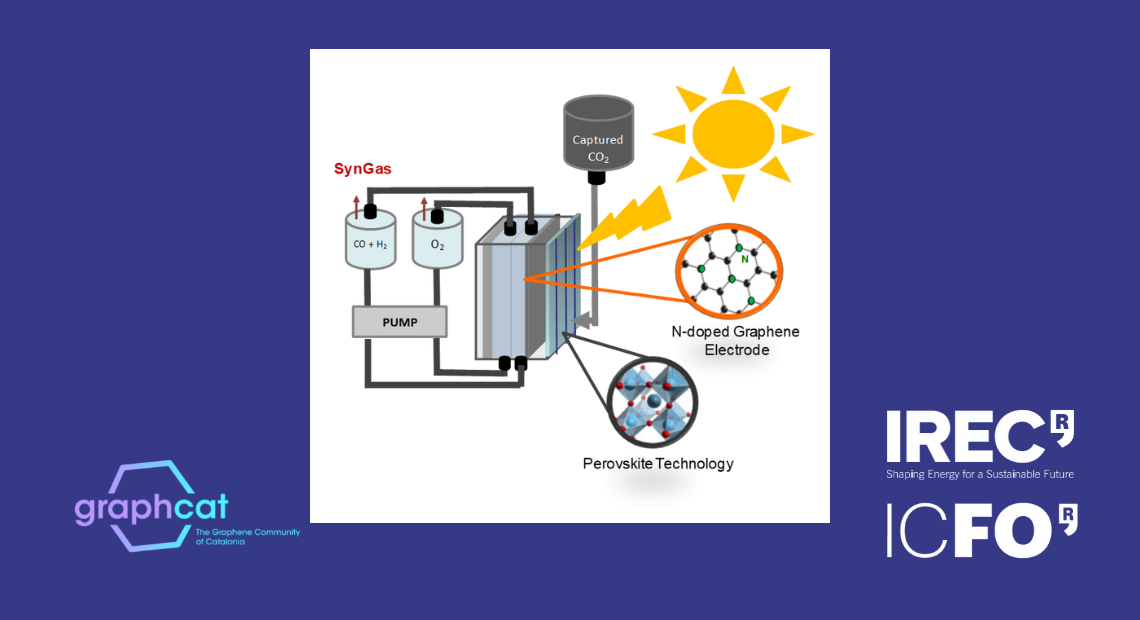 The project held a final meeting 23rd of May in ICN2 facilities, where the main outcomes of the project and the GRAPHCAT community where presented. You can find some general conclusions on these social media posts.

INTEGRO is one of the research projects within the GRAPHCAT Community, focused on solving energy challenges. The main goal of this project was to integrate a CO2-reduction electrochemical cell (EC), based on graphene electrodes, with a perovskite photovoltaic system (PV) connected in series, with an open circuit potential enough to carry out the CO2 reduction reaction, combining the expertise of IREC and ICFO. Such PV-EC device, powered only by solar energy, will work at low voltages (<2.4V) and high faradic efficiencies (>80%) for syngas production.

At IREC, we developed the graphene-based electrodes, demonstrating how the optimized double doping with nitrogen and sulfur by a simple thermal method was enough to make the graphene oxide catalytic, increasing the production of CO at higher temperatures (up to 950ºC). In addition, the electrocatalytic performance was optimized, and a final cell voltage of 1.8 V was envisaged for the desired reaction. A 2cm2 photo-electrocatalytic cell was built, with an optical window to allocate the perovskite PV-device fabricated by ICFO.

At ICFO, they manufactured a photovoltaic perovskite material (MAPbI3-type) with a high open circuit potential of 1.06V and a total current of 22 mA/cm2 so, for the coupling with the electrochemical system, a series-connection of two photovoltaic cells is needed, properly encapsulated.

The complete prototype PV-EC was tested at IREC facilities and it was demonstrated the feasibility of solar-assisted CO2 photo-electrochemical conversion to syngas without the utilization of metal-based catalysts for the cathodic reaction.

The project is co-financed by the European Union through the European Regional Development fund (ERDF) and supported by the Secretary of Universities and Research of the Ministry for Business and Knowledge of the Government of Catalonia in the framework of “Tecnologies Emergents”.