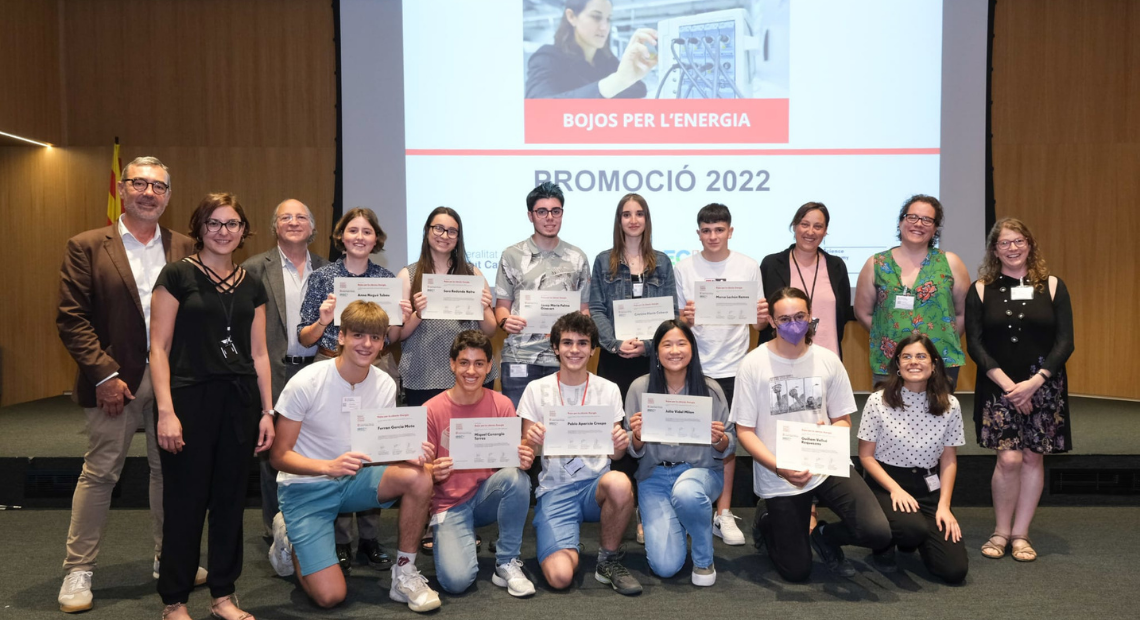 The closing ceremony of the first edition of Bojos per l’Energia course was held today, May the 19th, 2022, an initiative aimed at first-year high school students to promote knowledge about energy as well as scientific vocations among young people. The course had a a total of 12 students from different institutes in Catalonia, and took place on Saturday mornings from January until May 2022. This initiative belongs to the  Bojos per la Ciència program, organized by the Fundació Catalunya La Pedrera, with the Institut Català d’Energia (ICAEN) and the collaboration of the Catalonia Institute for Energy Research (IREC).

During 15 sessions, students have dug into the basics of the energy transition and got closer to the technological research that should make this change towards a decarbonized society possible, based on renewable energy and responsible use. Systems for producing and storing energy from the sun and wind, the application of digital technologies to energy technologies or the development of solutions to optimize energy use and were some of the areas that the course has addressed, both from a theoretical and practical point of view.

In addition, the students had a useful experience in assessing the possibility of becoming professionals to this field in the near future, since the course provided them with direct contact with the world of research. The course, coordinated by Anna Magrasó from IREC, consisted of an introductory session on energy by the ICAEN, followed by 14 sessions by IREC researchers from all areas of research, including Jacob Andrade Arvizu, Alejandro Pérez-Rodríguez, Yudania Sánchez and Pedro Vidal, from the Solar Energy Materials and Systems group; Alex Morata and Marc Torrell from the Nanoionics and Fuel Cells group; Andreu Cabot from the Functional Nanomaterials group; Sebastián Murcia, Mª Isabel Díez García, Andreina Alarcón, Viktoriia Holovanova and Martí Biset from the Energy Storage, Harvesting and Catalysis group; José Ignacio Rapha, Pol Paradell, Anzhelika Ivanova from the Power Systems group; Gabriela Benveniste, Victor Ferreira, Maite Etxandi, Mariana Jiménez and Josh Eichman from the Energy Systems Analytics group; Jordi Pascual, Soledad Ibañez, Elisenda Clèries, Thibault Péan, Paolo Taddeo and Joaquim Romaní, from the Thermal Energy and Building Performance group.

Bojos per l’Energia fulfils the purpose of promoting scientific and research vocations among young people in areas related to the change towards a new, cleaner, sustainable and democratic energy model. The energy transition will require both research and innovation from scientific approaches and the training and qualification of professionals of different profiles required to respond to these needs.

The Bojos per l’Energia initiative will continue next year, so we are looking forward to the second edition in 2023!