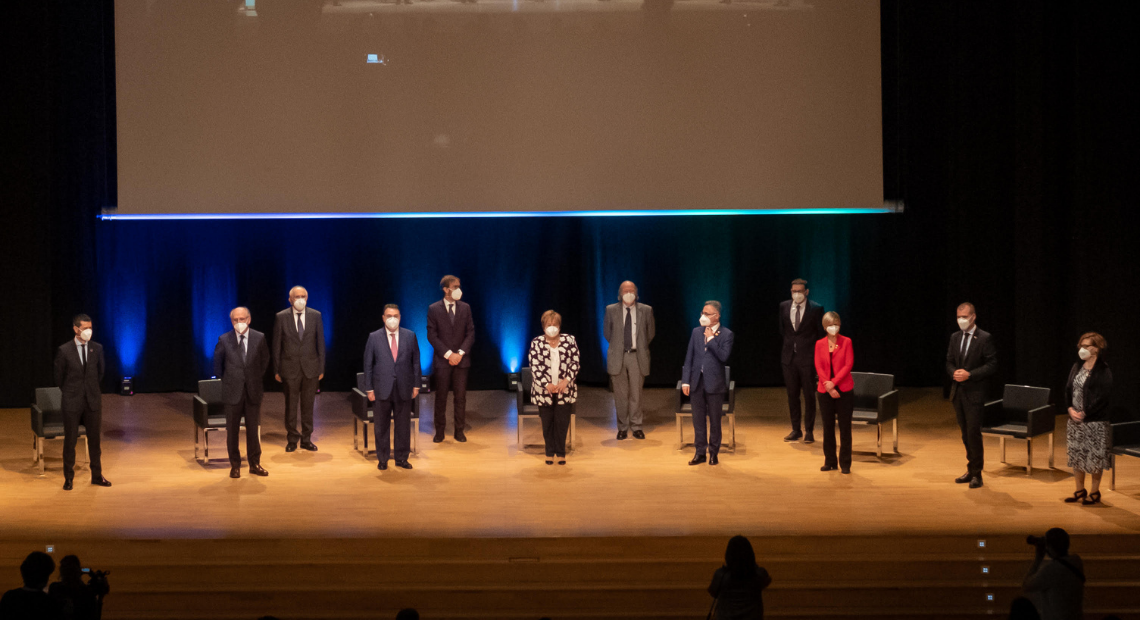 The Catalonia’s Hydrogen Valley has been presented today, on Friday 14th of May, at the Palau Firal i de Congressos -Congress Centre- of Tarragona, with the authorities and more than one hundred companies and organizations involved in this alliance. The event has served to reinforce the commitment of all the agents in the climate emergency situation to promote the society and the economy of renewable hydrogen. This strategic initiative works towards the consolidation of an integrated ecosystem in the hydrogen chain value, an energy vector for achieving the climate neutrality, and to increase business competitiveness, improving people’s well-being.

The event was leaded by the Vice President of the Government of Catalonia and Minister of Economy and Finance, Pere Aragonès, who has highlighted that the Hydrogen Valley “is an example of the transformational projects that the country needs and a great opportunity to change the energy consumption model“.

The agreement of all parties to promote the growth of the Hydrogen Valley of Catalonia, with economic development and climate change mitigation as an objective, has resulted in the signature of a memorandum by the main agents of the initiative, represented by: Ramon Tremosa, Minister of Business and Knowledge of the Generalitat de Catalunya; María José Figueras, Rector of the Universitat Rovira i Virgili; Noemí Llauradó, President of the Diputació de Tarragona; Josep Maria Cruset, President of the Autoritat Portuària de Tarragona; Montserrat Ballarín, vice-president of the Area of Social and Economic Development of the Metropolitan Area of Ajuntament de Barcelona, and Rubén Folgado, president of the Association of Chemical Companies of Tarragona (AEQT), as well as Antonio Brufau, president of Repsol and Antonio Llardén, president of Enagás.

The Vice-president, Pere Aragonès, also explained that the Hydrogen Valley of Catalonia project is more than a clean alternative energy source, because it allows “taking advantage of the current economic crisis to promote the transformation that the country’s production system needs“. According to Aragonès, ” ambitious projects with a high impact like this one are exactly what the Catalan economy needs to achieve a high level of competitiveness to become an international reference, also in the fight against the climate change“. He described the Hydrogen Valley of Catalonia as “extremely exciting” because it must be “the first step to reduce carbon emissions“. “This initiative gathers all the characteristics about how we want the Catalonia to be in the future, the Catalonia that we must begin to build from now on“. According to Aragonès, the Next Generation EU funds are an opportunity that Catalunya shouldn’t miss. In fact, the Hydrogen Valley of Catalonia is one of the 27 selected projects for the economic recovery that the Government of Catalonia wants to prioritize in order to have access to the European funds.

The event, presented by journalist Xavier Grasset, also served to formalize the alliance of knowledge, science and technology integrated by Rovira i Virgili University (URV), the Catalan Institute for Chemical Research (ICIQ), the Catalonia Institute for Energy Research (IREC) and the Eurecat Technology Center, a research and innovation hub of the Hydrogen Valley of Catalonia, which has long been working around renewable hydrogen.

In addition, the signing ceremony of the Memorandum has also attended by the main authorities from the field of knowledge and public administrations: Secretary of Universities and Research, Francesc Xavier Grau; General Director of Industry, Matilde Villarroya; Director General of Energy, Manel Torrent; and the CEO of ACCIÓ, Joan Romero.

Check up the new video release from Hydrogen Valley of Catalonia in this link.