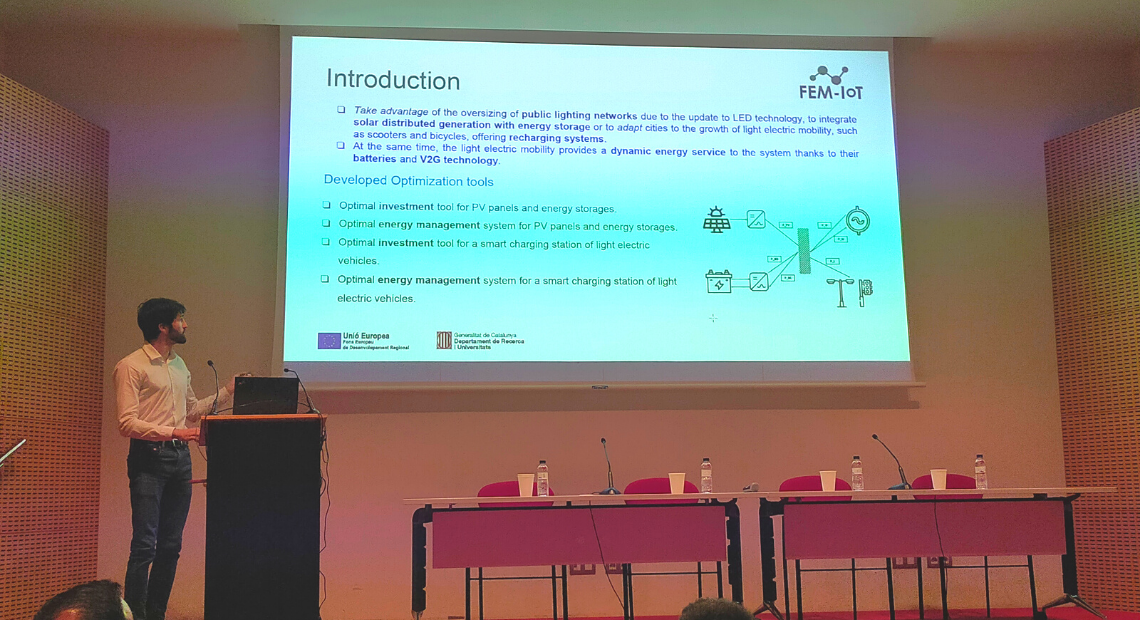 The P2-FEMIoT project, focusing on “Valorisation of IoT data”, finalised recently, holding the final meeting in the framework of the IoT World Congress (Barcelona, 10-12th May 2022).

(1) Facilitating the sharing and integration of infrastructure in Smart Cities

IREC had different roles in the project. An important part had the objective to define four different tools, which take advantage of the current oversizing of the public electrical network, due to the introduction of the LED technology. On one hand, two sizing tools, one for light electrical vehicles (LEVs) charging stations and another for a PV panels and electrical storage system, and on the other hand, two management tools for LEVs charging stations and a PV panels and electrical storage system.

In terms of the LEVs charging stations, most of the state-of-the-art literature is focused on electrical cars and, to the best of our knowledge, the case of LEVs charging stations has not been explored yet. The sizing tool is designed for public entities, which gives service to private LEV users. On a different fashion, the management tool is designed for public and private entities, which possess a fleet of LEVs and provide a sharing system for users. This kind of entities can benefit from an optimal planning tool for the charge and discharge of their vehicles. This type of business is nowadays found in almost every major city, with either public or private businesses (Bicing, in Barcelona; HumanForest, in London, among others).

Regarding the PV system, the EU and other organizations are pushing state governments to adopt decisions to to greenhouse gas emissions. The introduction of PVs in urban areas could reduce the energy dependency of cities by generating green electricity. For this purpose, a sizing and a management tool for PV panels and energy storage devices has been developed, taking into account the street demand (streetlights and traffic lights). For these tools, weather information –irradiation, temperature, and wind speed— has been taken into account to predict the PV panel generation.

Finally, the tools have been developed in Python, packaged into four different docker images, and launched in the private server developed by another partner, giving a visual interface to test the tools. The results from the optimization tools comprise: a set of KPI and a file with the optimal investment solution including the variables values in the optimization (power generation, power charged to batteries…).

The project is co-financed by the European Union through the European Regional Development fund (ERDF) Operational Programme Catalonia 2014-2020 and supported by the Secretary of Universities and Research of the Ministry for Business and Knowledge of the Government of Catalonia.