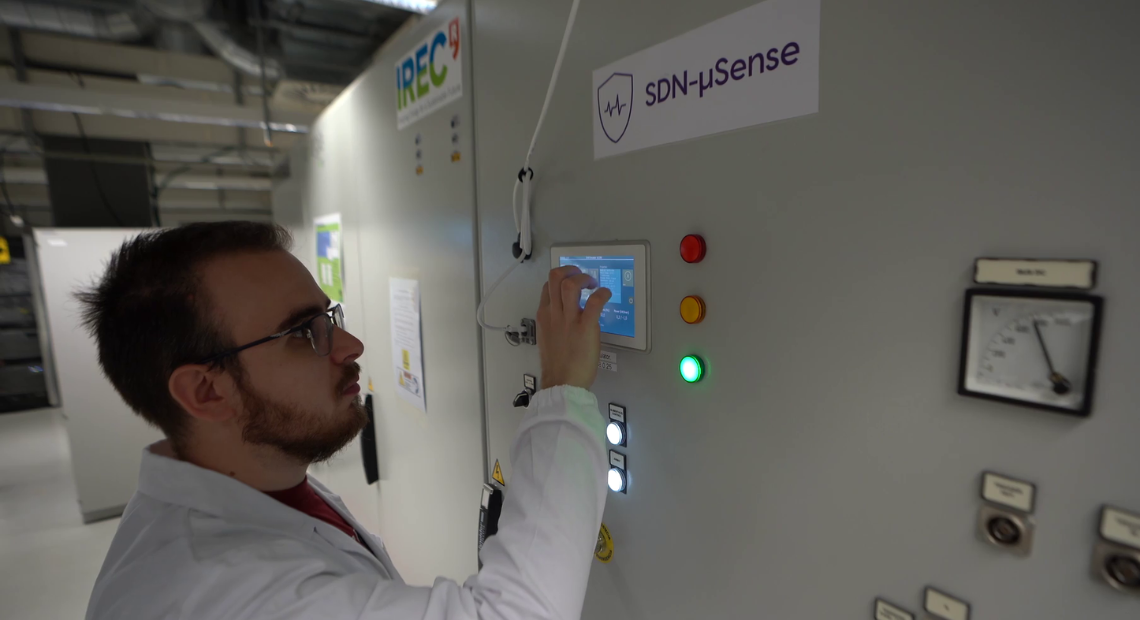 Cyberattacks are becoming a serious threat for power systems and their prevention are gaining attention and need to be better understood by developers, technology providers and network operators, among others.

SDN-microSENSE (SDN -microgrid reSilient Electrical eNergy SystEm) is an innovation H2020 project, that ended in October 2022. It provided a set of secure, privacy-enabled, and resilient to cyberattacks tools, thus ensuring the normal operation of the Electrical Power and Energy Systems (EPES) as well as the integrity and the confidentiality of communications. The Software Defined Network (SDN) technology can increase EPES security, to enable mitigation of cyberattacks in the communication layer of the power system infrastructure. The means to achieve attack mitigation is to isolate compromised devices from the rest of the communication system by (through SDN) dynamically rearranging the routing paths of transmitted data.

The project demonstrates that the incorporation of SDN into microgrids can offer some great advantages over conventional networks: The traditional hardware-dependant communication infrastructure is not designed to identify the flow and context of the data and it only focuses on packet forwarding using pre-defined network configurations. SDN provides programmability, dynamicity, flexibility, and intelligence to current network architectures, and its benefits can be delivered from four main features: dynamic flow control, network-wide visibility with centralized control, network programmability and simplified data plane.

All the project results and achievements will be presented in the final open event that will take place on 10/11/2022 at 9:30 CET, you can join it by using this link.

Power systems group, from IREC, leads the work package linked to the self-healing capabilities (SDN-SELF); resilience against all kinds of faults, including faults in both the communication system and in the electrical power grid, that the SDN-technology could offer.  In that context, it has been specified how SDN is applied in the EPES ecosystem, thus transforming the corresponding EPES devices into a new architectural paradigm called SDN-enabled EPES devices.

The developments achieved within the previously mentioned work package include the components for the monitoring and control of the equipment in the EPES infrastructures, for the analysis of the current situation in EPES domain and issue mitigation through islanding or energy management mechanisms and for the recovery of the grid observability and the improvement of its QoS when the communication network is under attack.

The main outcomes are:

In addition, IREC has developed a testing platform (inside the Smart Energy Laboratory) allowing the integration, testing and validation of cyber-threads into a controlled electrical environment, as well as the application of SDN algorithms and technologies. Such testing environment allows full testing of cyber-attacks and potential countermeasures into electrical equipment and communication devices. This platform was required to validate developed tools before using them in the real electric grid, which is a critical infrastructure.

Moreover, IREC has included new functionalities to an own registered tool, called Optimization Tool for Self-healing and Clustering (OTSC), which is composed of two different parts inside the SDN-SELF architecture. The Islanding and optImisation fraMework  (OTSC-IIM) part aims to create a new electric scheme by creating islands to divide the grid into different sectors. The intention of that is to isolate the elements that can cause problems in the grid and at the same time maintain the power supply to the maximum number of consumers. To perform the island, the tool needs to know the status of the grid and the distributed energy resources there. The Energy Restoration and Management Processes framework (OTSC-EMO) part aims to balance the energy in one or more islands in the electric grid. The idea of this tool is to work in an emergency scenario in the electric grid, where the electric grid is forced to divide the original topology into small parts. Both parts can work together, and once the OTSC-IIM finishes, the OTSC-EMO should start to work with the islanding situation.

The project manages information classified as  ‘Restreint UE / EU Restricted’. IREC has received accreditation by the National Authority Service to process information with this classification level.

This project has received funding from the EU’s H2020 research and innovation programme under grant agreement No 833955.