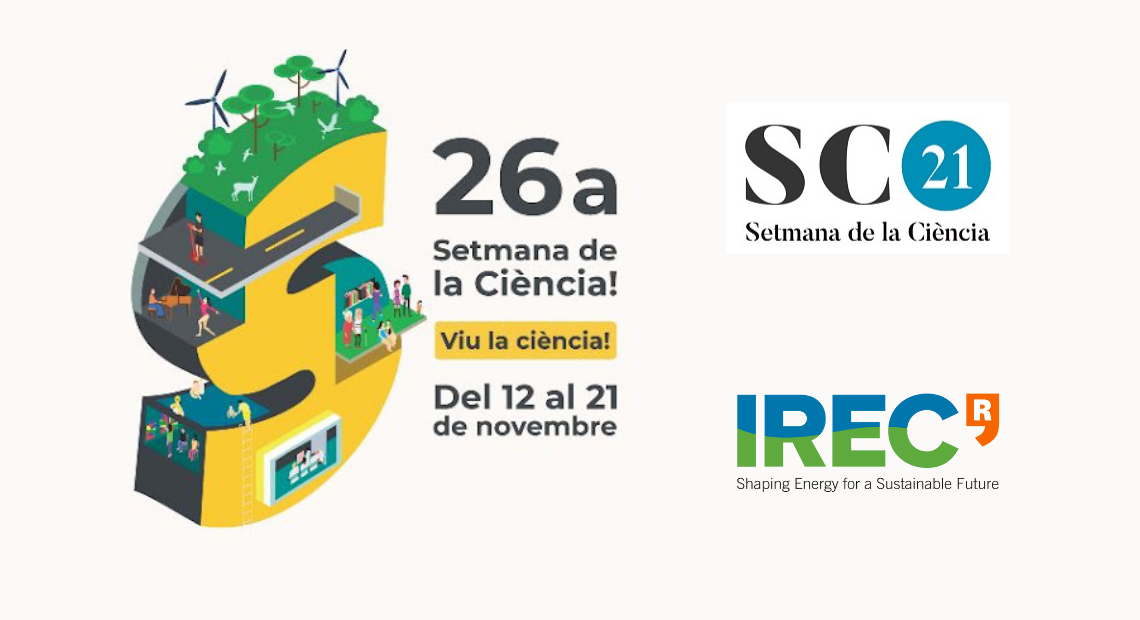 The 26th edition of the Science Week is held in Catalonia from 12 to 21 November with the aim of bringing science and technology closer to citizens and promoting scientific careers among the youngest.

IREC has participated in several scientific dissemination activities and outreach activities, ranging from school visits to talks and demonstration workshops.

On November the 16th, Paulina Martínez participated in the event “Scientia motus-Ciencia en movimiento, apostando por el futuro” organized by Red Global MX, which organizes events to connect with Mexican citizens studying or working anywhere in the globe. She presented the WINE-EVIB Tecniospring project (ACCiÓ) that she will start at IREC in January 2022.

On the 17th of November, Anna Magrasó was at Vil·la Urània (Sarrià) to present the exhibition: ‘Gara and the energy that surrounds us‘ (link). This is a teaser of the “Gara” project, which will be a full modular exhibition touring from January to June 2022 in different locations, including civic centers, museums or schools. “Gara and the energy that surrounds us” is an exhibition project of innovative scientific dissemination developed by IREC on the energy transition with the collaboration of the Spanish Foundation for Science and Technology (FECYT) – Ministerio de Ciencia e Innovation. The initiative aims to improve the scientific and technical education of people on energy. The aim is to open a dialogue with the public to improve social training in science and energy, increase scientific knowledge and bring scientific research closer to society.

On November the 18th, Marc Torrell went to the Institut Can Puig (Sant Pere de Ribes) to talk about the energy scenario and the role of hydrogen as a transforming vector for a more sustainable system. During the talk, the researcher could establish a dialogue with the students while demonstrating the technology using a demo version of a hydrogen car.

On November the 19th, Albert Llorente went to Escola Mallorca (Barcelona) to showcase several demonstration kits related to renewable energy to primary students. He explained the advantages and disadvantages of clean energy generation and storage, while playing and enjoying the time with the youth. This initiative is also part of the FECYT project: ‘Gara and the energy that surrounds us‘ described above. Thanks to “Aula oberta” for making this event possible!

During this period, a 5th grade primary student at Escola Gassó i Vidal (Ripollet) explained to students at 2nd grade of the same school how renewable energies and a sustainable home work, using dissemination material provided by IREC.

Science Week is an initiative coordinated by the Fundació Catalana per a la Recerca i la Innovació (FCRI) with the support of Departament d’Empresa i Coneixement from Generalitat de Catalunya. You can find all 2021 activities in this link.